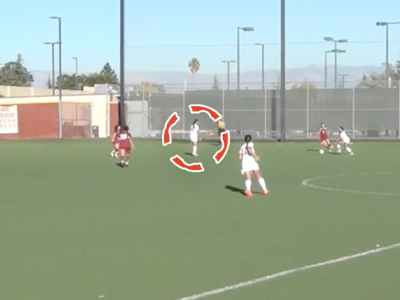 Invited to guest play at the “best of the best” showcase, San Diego Surf Cup

Selected team MVP 6 of 7 seasons by teammates and coaches.

Competed in National Cup IX, US Soccer Regional Champions in 2010.

Commentary: “Nicole is an extremely talented soccer player. She is capable of

dominating games and scoring goals from any position on the field. With the ball, Nicole’s

twenty years as a soccer coach. Nicole’s passing is impeccable both in tight spaces, and

with long balls. I have seen Nicole score many goals from as far as 40 yards out because

of her power, and her shot placement. Defensively, Nicole can organize teams very well

and slide tackle as clean and powerful as any girl I have ever seen. Girls like Nicole are

very special soccer players, and Nicole Rodrick would be an asset on any Division 1

“I have known Nicole since she was nine years old. I started training Nicole one-on-one

at age nine, and still train her one-on-one today. For six years I was her club soccer

coach and trainer: five years with San Mateo Soccer Club, and one year with Union

Football Club. Nicole absolutely loves soccer and it is very evident in the way she trains

and the way she plays. Off the field, Nicole is a very sweet young lady, polite, courteous,

and respectful. When our soccer teams would travel and stay overnight at hotels, Nicole

was very ladylike and traveled responsibly. Nicole has an amazing family which is very

supportive and loving. I truly believe that Nicole is talented enough to play Division 1

college soccer, and would be an asset to any college program.”

Commentary: “Nicole has excellent speed and acceleration, but her ability to read the play on

and off the ball, and to win the ball through guile, intelligence, balance and strength mark her as

a player the ball gravitates toward. She never shirks a challenge, and is keen to attack a loose

“Overall quieter in a group, Nicole comes to the fore when the game commences and is

physically, emotionally and psychologically involved in doing what she and the team can do to

win the game with her positive game analysis and communication with coach and players.”

arts. After self-teaching myself how to produce electronic music as a hobby throughout high

school, I decided to enroll in a formal course to explore and enhance my interest in digital music

composition and audio engineering. During the seminar I was introduced to state of the art

systems like ProTools and LogicPro. This experience opened my eyes to the potential of a

I worked for three months in a grocery store concept at San Francisco Intl. Airport, where I

trained and worked as a coffee barista and as a cashier in the rotisserie kitchen area. This was

my very first job and I loved the experience. I learned the importance of teamwork in a

completely different setting (not athletics), enjoyed interacting with the travelling public and

earning my own spending money.

Ronald McDonald House provides a home away from home for families of critically ill children. I

volunteered at the Ronald McDonald House at Lucille Packard Children’s Hospital at Stanford,

helping coordinate activities for kids in the CLIK (Computer Learning is for Kids) Center. This is

an area of the house where kids of all ages can come to do work on computers, play games or

I was introduced to this local non-profit organization while I was in middle school. It was the first

time that I became personally involved as a volunteer, raising money for their programs and also

spending time in their office in San Francisco as an assistant. PAWS provides furry